Princes Harry and William have briefly joined forces to speak out against a story “speculating” about their relationship amid the chaos surrounding the Duke and Duchess of Sussex’s decision to “step back” as senior royals.

The brothers released a rare joint statement on Monday in response to an unnamed story that they viewed as “potentially harmful.”

“I’ve put my arm around my brother all our lives and I can’t do that any more; we’re separate entities,” William reportedly said, per The Sunday Times. “I’m sad about that.”

“All we can do, and all I can do, is try and support them and hope that the time comes when we’re all singing from the same page. I want everyone to play on the same team,” the Duke of Cambridge added.

Harry addressed rumors of a rift with his brother back in October in the ITV documentary “Harry & Meghan: An African Journey.”

“The majority of the stuff is created out of nothing,” he added. “But as brothers, you know, you have good days, you have bad days.” 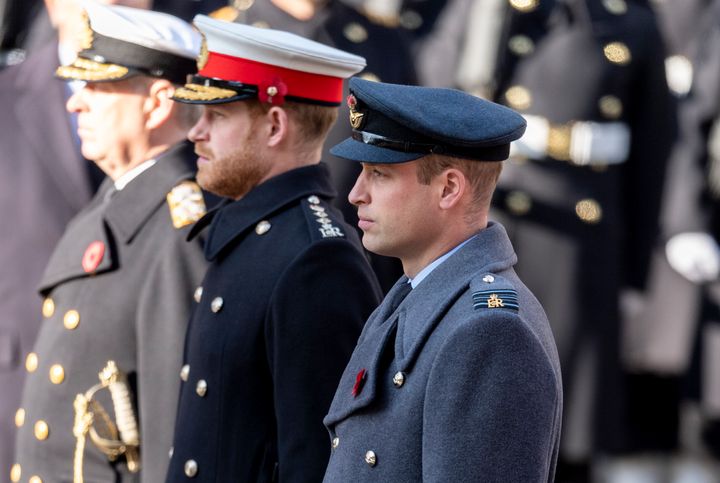 William and Harry attend the annual Remembrance Sunday memorial at The Cenotaph on Nov. 10, 2019 in London.

On Saturday, it was announced that William, Harry and Prince Charles are expected to meet with Queen Elizabeth on Monday for an emergency family meeting. Meghan Markle, who flew back to Canada to be with the couple’s son, Archie, will reportedly dial in to the talks.

The Duke and Duchess of Sussex announced last week that as they step back from their roles as royals, they will be working toward financial independence, reexamining their relationship with the media and splitting time between the U.K. and North America.

Only Buckingham Palace has publicly commented on the move, saying Wednesday that talks with Meghan and Harry are still “at an early stage.”

“We understand their desire to take a different approach, but these are complicated issues that will take time to work through,” the palace added.

Subscribe to HuffPost’s Watching the Royals newsletter for all things Windsor (and beyond).