The days of lime and soda are over. “Sugary, carbonated or fruit-based juice drinks just won’t do” for those seeking a booze-free alternative.

At least, that is the view of Seedlip, which claims to be making the world’s first distilled non-alcoholic spirits.

“We exist to solve this dilemma. What do you drink when you’re not drinking?” says Ben Branson, founder of the Chilterns-based business.

It is a conundrum that traditional drinks firms are also trying to crack.

Diageo, the world’s largest spirits maker, has just bought most of Seedlip. And industry experts say it is not alone in trying to find ways to tap into the non-alcohol sector.

Two years ago, Campari launched Crodino in the UK, its non-alcoholic aperitif named after a small town in north-west Italy.

The firm says Crodino is the most-consumed drink of its kind in Italy since first being produced 55 years ago.

Nico von Stackelberg, analyst at Liberum, says: “There’s a significant rise in alcohol-free drinking across the western world, including the US. In terms of economics, it absolutely makes sense to be involved.

“Younger people do not want to be seen as drunk on social media. Heavy episodic drinking is not deemed to be cool. Importantly, the industry does not want excessive consumption and spends millions to avoid such behaviour,” he adds.

Research shows that the young are drinking less. A report in the medical journal BMC Public Health and carried out by University College London showed that the proportion of 16 to 24-year-olds who do not drink alcohol has increased from 18% in 2005 to 29% in 2015.

It points out that it is difficult to pinpoint a single factor that has caused the decline in alcohol consumption.

But it is not a just a UK phenomenon. The research showed a fall in drinking in North America and elsewhere in Europe, although in Canada, rates of binge-drinking increased from 1996 to 2013. In the UK, while rates are falling, young people remain the most likely group to be binge-drinking

Dr Linda Ng Fat, lead author of the study, told the BBC that the findings suggested cultural change was leading to a reduction in drinking, and that health reasons could also be a factor.

Alex Smith, consumer industry analyst at Shore Capital, says the push into the non-alcohol sector is consumer-led. “Younger people are consuming less alcohol, so alcohol companies have to hedge their bets”.

The beer market has been offering non-alcoholic versions for some time. In the 1980s, Kaliber from Guinness was one of the best-known, but more and more are being launched, such as Heineken 0.0% and Budweiser Prohibition Brew.

The number of products on offer is growing. According to Nielsen research there were 40 non-alcoholic brands on the market two years ago. That has risen to 65 brands this year.

Seedlip’s founder, Mr Branson, has said his own inspiration to create a non-alcoholic sprit came after he was given a “sickly sweet pink mocktail”. After experimentation on his family’s farm, he launched his venture in 2015.

He began using a small copper still and herbs from his garden to create a distilled non-alcoholic spirit – not a gin, as that would require juniper.

There are three blends: one based on peas, another on bark and citrus, and another on orange, lemongrass and ginger. 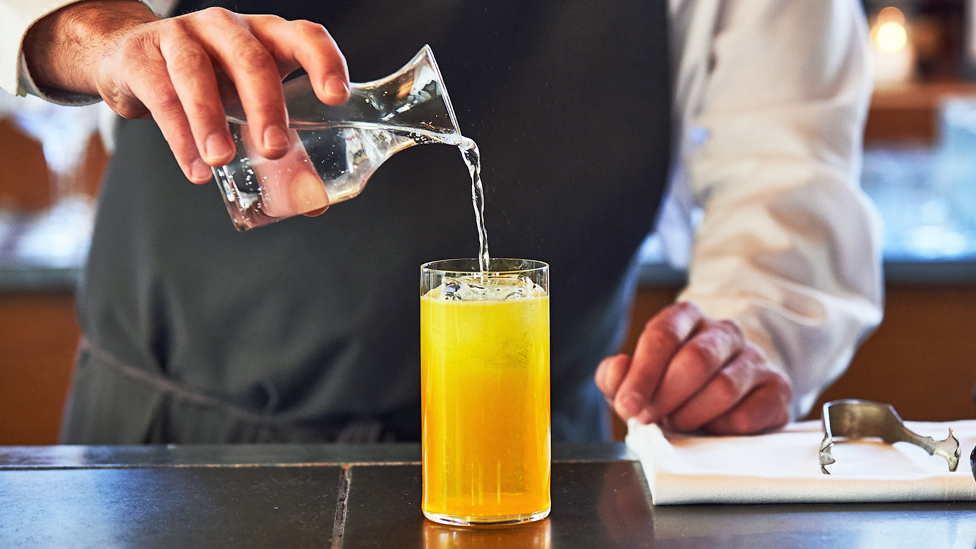 Diageo has put Seedlip in its so-called Reserve portfolio – its luxury division – and the recommended retail price for 70cl is £27.99. That’s about £7 more than the same amount of Bombay Sapphire gin.

There is no duty or tax on such products, so profits should be higher too.

Seedlip is the first non-alcoholic investment by Distill, an investment vehicle supported by Diageo which backs start-ups and has put more than £60m into 15 different new products.

Diageo has also created its own non-alcohol products in-house, such as Gordon’s low-alcohol gin, launched in 2018, and Malta Guinness, a non-alcoholic unfermented beer popular in Nigeria.

It does not provide a breakdown of sales and profits from non-alcohol products, nor has it disclosed how much it paid for its majority stake in Seedlip, which lost £4m in the year to May 2018, according to accounts at Companies House.

But Diageo’s John Kennedy has described it as a “game-changing brand in the one of the most exciting categories in our industry”.

The drinks company has also said that is “tracking what is happening” – though not yet expanding – in another industry that might take sales away from alcohol: the decriminalisation of cannabis.