Rwandan gospel singer Kizito Mihigo was at one time hailed as a great national talent but then he was accused of being a traitor. He was recently found dead, at the age of 38, in a police cell. The BBC’s Great Lakes Service looks back at his life.

With his signature crucifix dangling around his neck and his patient demeanour, Kizito, as he was popularly known, resembled a priest rather than one of the most popular performers in the country.

Like a priest, he felt he had a mission to promote peace in a country scarred by slaughter, but it was this mission that is widely seen as having eventually landed him in trouble with the authorities.

He was initially embraced by the government. His concerts drew tens of thousands of fans, from all walks of life, who appreciated his message offering hope for the future.

But his journey from superstar to pariah was swift. 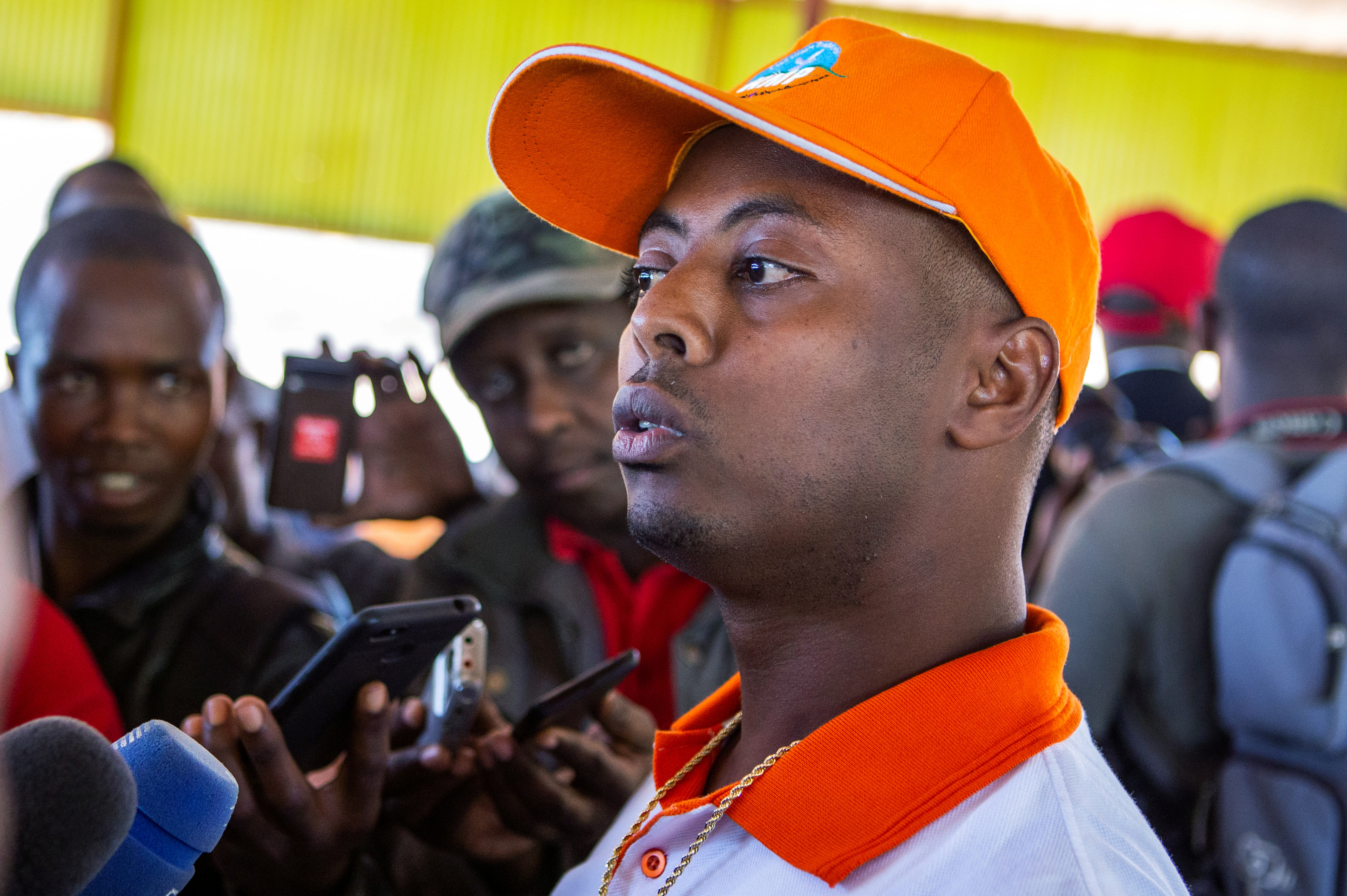 Influenced by his father, who composed liturgical music, his songs echoed the sounds heard in Catholic worship.

But in 1994, at the age of 12, he lost his father, as well as other relatives, in the Rwandan genocide, in which about 800,000 people, ethnic Tutsis and moderate Hutus, were murdered by Hutu extremists.

Profoundly affected by what had happened, Kizito, an ethnic Tutsi, made reconciliation a central message of his work once he became a performer.

Dove of love and peace among people

Dove of asking for forgiveness and forgiving

Dove for the willingness to reconcile

That’s the good dove and the one we need

Born in 1981, Mihigo was the third child in a family of six. He grew up in Kibeho, southern Rwanda, an area that became a pilgrimage site after several schoolchildren there saw apparitions of the Virgin Mary in the 1980s.

It was in this religious context that the future gospel star grew up.

He fled to neighbouring Burundi in the wake of the genocide and was reunited with surviving members of his family.

An initial plan to join the army and take vengeance for the death of his father did not work out as he was turned away. But then, at 14, he enrolled in the Karubanda Minor Seminary, where his musicianship was nurtured.

“I will remember him as a very talented musician who gave people joy, who was a trailblazer in composing and singing,” school friend Jean de Dieu Sibomana told the BBC.

In his second year at the seminary, Kizito became the school’s chief organist ahead of some more senior students and led an elite choir, which entered competitions across the country.

Eventually, his talent was recognised by President Kagame who awarded him a scholarship to study at the prestigious Conservatoire de Paris.

America and Europe, Asia and Oceania, give us shelter,

But let us never forget that we are children of Rwanda

He began his performing career in Europe, but he never forgot where he was from and he went home in 2011. He was feted by the authorities and often invited to sing at official functions in front of the president.

Kizito was also awarded a prize by the first lady, Jeannette Kagame, for establishing a foundation to promote peace and reconciliation.

By 2013, the government was partly funding the Kizito Mihigo Peace Foundation, which saw him tour schools and prisons to spread his message.

But Kizito’s fortunes changed in 2014 after he released The Meaning of Death.

Timed to coincide with the 20th anniversary of the genocide, many saw the song as challenging the officially accepted version of what happened – that only Tutsis were killed.

Those brothers and sisters, they too are human beings

I pray for them. I comfort them. I remember them

Death is never good, be it by genocide, or war, or slaughtered in revenge killings

In The Meaning of Death, Kizito was not only asking for those who were murdered by the Hutu extremists to be remembered, but all those who were killed around that time.

This was viewed by some as a reference to the revenge killing of ethnic Hutus allegedly committed by Mr Kagame’s RPF as they took power in 1994.

Although the RPF said that such killings were on a small scale and those who committed them have been punished, the government views comparing these killings with the mass slaughter of Tutsis as a form of genocide denial.

The RPF has a reputation for not tolerating any dissent. “Political opposition leaders have been intimidated and silenced, arrested or forced into exile,” in the words of Human Rights Watch (HRW).

A number of prominent government critics have been killed inside and outside the country in recent years.

The government has denied involvement in most of their deaths, although President Kagame last year said he should not be apologetic for the killing of former Home Affairs Minister Seth Sendashonga, who was shot dead in Kenya in 1998.

On 7 April 2014 Kizito was reported missing and days later the police paraded him in front of the media. He was accused of plotting terrorist attacks and working with opposition movements with the aim of toppling the Rwandan government.

His music was then banned on all local radio and television stations.

In 2015 he was sentenced to 10 years for planning to kill the president and conspiring against the government. At his trial, the prosecution produced text messages that showed him plotting the assassination. 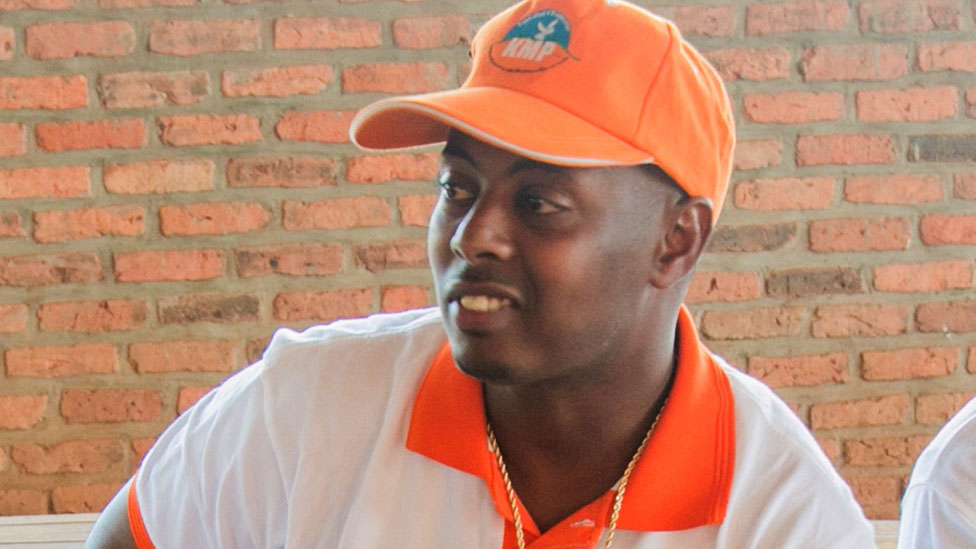 I was told that I had to plead guilty. They said if I didn’t plead guilty, they would kill me”

He confessed to the charges, but later said he was coerced into pleading guilty. He was convinced that it was that song that got him into trouble.

“I was told that I had to plead guilty. They said if I didn’t plead guilty, they would kill me,” he told human rights activist Ruhumuza Mbonyumutwa on the phone from prison in 2018. The audio from the interview has just been released.

More on the genocide:

Asked if he would write the song again, Kizito said: “Yes, I would. I couldn’t help myself.”

“The song was about reconciliation. I got to a point where I felt compassion for all victims,” he added.

“Not just victims of the genocide against the Tutsi, of which I am one. But also victims of other violence committed by the ruling RPF.”

He was freed in September 2018, after being pardoned by the president, along with 2,000 other prisoners.

On his release, he told the BBC that he would continue with his music and through his foundation would carry on his activism with the message of “living in peace, reconciliation, unity and tolerance” among Rwandans.

But, like all those pardoned, his movements were restricted and he had to report regularly to the police.

Shortly before his death, he told HRW that “he was being threatened to provide false testimony against political opponents” and that he wanted to flee the country.

Found dead in a police cell

On 13 February, the Rwanda Investigation Bureau (RIB) announced that he was in custody after he was arrested for trying to cross into Burundi illegally.

Four days later, he was found dead in a cell, after hanging himself, according an RIB investigation.

A number of human rights organisations and foreign-based Rwandan activists have cast doubt on the official version.

Philippe Basabose, a spokesman for 36 genocide survivors living abroad, wrote an open letter to the president calling for an independent investigation to be carried out by international experts and government officials.

But state prosecutors said that the evidence and witness statements showed that the cause of death was “suicide by hanging”.

Be a hero my child

I love you and through that I love Rwanda

That’s why I am going to dedicate it to you

Be a hero and be important for Rwanda

For those who see Kizito as a hero, he has become a symbol of someone prepared to stand up to the government.

But for the authorities, he was a criminal who had betrayed the president.