A respiratory virus first detected in the Chinese city of Wuhan has now infected thousands of Chinese citizens and spread to a number of other countries.

The fast-moving infection, which causes pneumonia-like symptoms, has been declared a global emergency by the World Health Organization.

It has claimed hundreds of lives and prompted Chinese authorities to quarantine several major cities. A number of countries have advised against all non-essential travel to China.

These maps and graphics will help you understand what is going on.

1. Cases have been mainly in China

Thousands of confirmed cases have been recorded across China, with central Hubei province the worst-affected.

The World Health Organisation (WHO) is warning the number of cases is likely to rise further.

However, the latest figures released by the Chinese National Health Commission show the number of new daily confirmed cases has begun to decline. It remains to be seen whether this trend continues.

Chinese authorities have introduced a number of measures to try to halt the virus’s spread.

Travel restrictions have been imposed on a number of cities in Hubei province and people have been asked to wear face masks in public places. Lifts in high-rise buildings have also been disabled to discourage residents from going outside.

The Chinese government has closed a number of temples, the Forbidden City and part of the Great Wall and the capital Beijing has banned group dining for events such as birthdays.

Other cities are limiting how many family members can leave home each day.

The WHO declared the crisis a global health emergency last week as a result of the virus’s spread outside China.

The concern is that it could spread to countries with weaker health systems, the WHO said.

More than 27,000 cases have been recorded in Hubei province – the centre of the outbreak – which has also seen most of the deaths as a result of the virus.

Restrictions on travel are affecting at least 20 million people across 10 cities – including the capital Wuhan, where the virus emerged.

Its origins have been linked to illegally traded wildlife at the city’s seafood market, which sells live animals including bats, rabbits and marmots. However, the exact source of the outbreak has not been identified.

Wuhan – which has a population of 11 million people – has gone into lockdown, with authorities suspending flights and train services in and out of the city. Local officials said no-one from the city had left Wuhan in four days.

“My university is checking every student’s body temperature every day and are offering free masks. It also has its own hospital and ambulance,” Chongthan Pepe Bifhowjit, an Indian student at the Wuhan University of Technology, told the BBC.

In a bid to tackle the increased demand for medical services in the city, the authorities have built two new hospitals, one with 1,000 beds and another with a capacity of 1,500 beds.

See how the new Wuhan hospital has taken shape 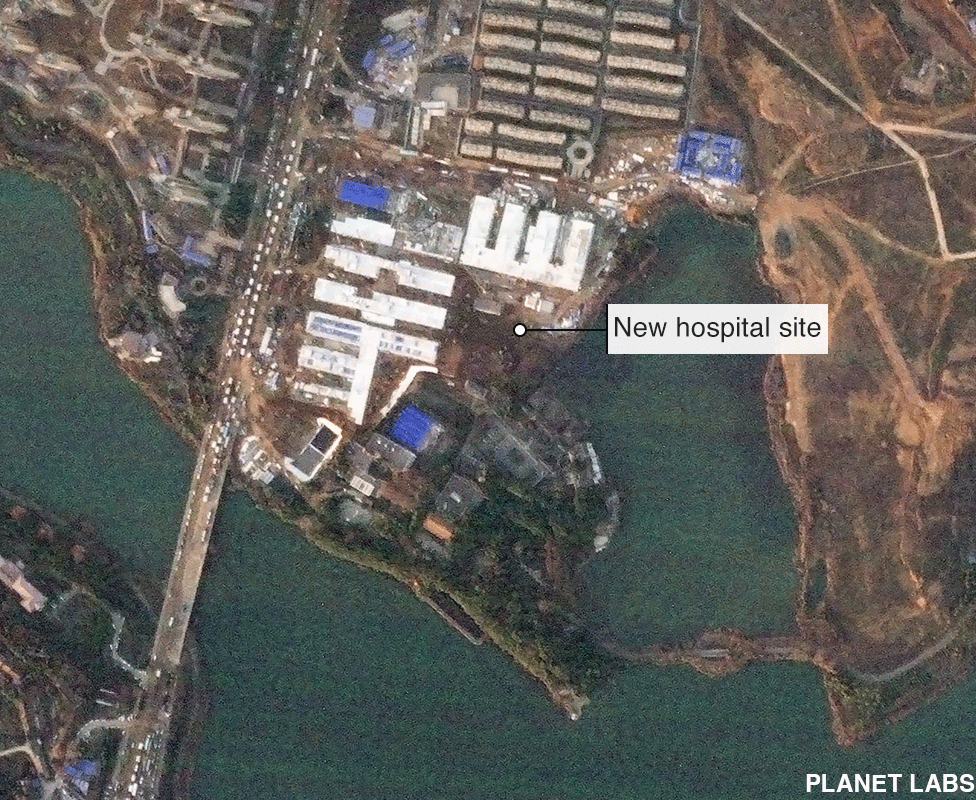 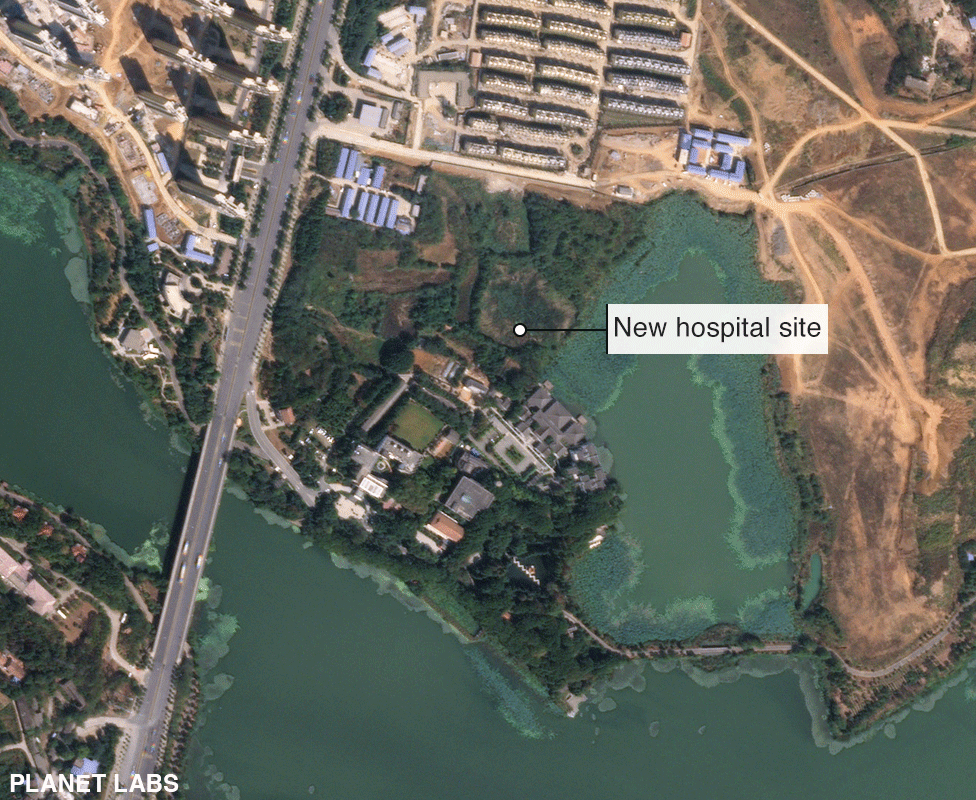 3. A number of other countries have seen cases

Infections have spread to 25 countries including Japan, Thailand, the US, Canada, France, Germany and the UK. The majority of these cases are in people who had been to Wuhan.

Some 64 people onboard a cruise ship of 3,700 people off the coast of Japan have also tested positive.

But so far, there have been only two deaths outside mainland China – one in Hong Kong and one in the Philippines. Both men had been in Wuhan, the epicentre of the outbreak.

A growing number of countries have advised their citizens to avoid all non-essential travel to China and many have announced screening measures for passengers arriving from the country.

Some have also been evacuating their citizens from Wuhan and placing them in quarantine to monitor them for symptoms and avoid contagion.

The US has gone further and declared a public health emergency. It has also said it would deny entry to foreign nationals who had visited China in the past two weeks.

In response, the Chinese government accused the US of spreading fear instead of offering assistance.

The WHO has warned against closing borders, saying it would accelerate the spread of the virus if travellers started entering countries unofficially.

4. The symptoms are respiratory

Coronaviruses are common, and typically cause mild respiratory conditions, such as a cough or runny nose.

This outbreak – known as novel coronavirus (nCoV) – is a new strain that has not been previously identified in humans.

It seems to start with a fever, followed by a dry cough and then, after a week, leads to shortness of breath.

But in more severe cases, infection can cause pneumonia, severe acute respiratory syndrome, kidney failure and even death.

A report on the early stages of the outbreak by the Lancet medical journal said most patients who died from the virus had pre-existing conditions.

The number of coronavirus cases worldwide has now surpassed that of the Sars epidemic, which spread to more than two dozen countries in 2003.

There were around 8,100 cases of Sars – severe acute respiratory syndrome – reported during the eight-month outbreak.

There is not yet a specific anti-viral treatment for coronavirus, so people with the infection are currently being treated for their symptoms.

The existence of coronavirus was first flagged by a Chinese doctor in late December, but he was reprimanded by local police for “spreading rumours”.

Dr Li Wenliang, a 34-year-old ophthalmologist, has since died from the illness. His death was met with an intense outpouring of grief on Chinese social media as well as anger towards Chinese authorities.

5. You can do things to reduce your chances of catching it

The WHO is advising people in affected areas to follow standard procedures to reduce the chance of catching the virus.

They include hand and respiratory hygiene as well as safe food practices.

People are advised to avoid close contact with people suffering from acute respiratory infections; wash hands regularly, especially after direct contact with ill people or their environment; and avoid unprotected contact with farm or wild animals.

Those with symptoms of coronavirus should practise “cough etiquette”, including maintaining distance, covering coughs and sneezes with disposable tissues or the inside of an elbow, and washing hands.

In China, protective face masks are in widespread use – both among the general population and medical staff.

Although virologists are sceptical about their effectiveness against airborne viruses, there is some evidence to suggest the masks can help prevent hand-to-mouth transmissions.

Medical advice in China is to change masks regularly – as often as four times a day for medical teams – and Chinese authorities have appealed to other countries to help with supplies.

6. If a case is suspected, there are processes to follow

The Chinese government has classified the outbreak in the same category as the Sars epidemic.

This means people diagnosed with the virus in the country must be isolated and can be placed in quarantine.

Within healthcare facilities, the WHO advises staff to implement enhanced standard infection prevention and control practices, especially in emergency departments.

The WHO advises that patients should be assessed quickly and treated for the level of severity of the disease they have – mild, moderate, or severe.

In the UK, family doctors – GPs – are being advised to place patients suspected of having coronavirus in isolation and avoid physical examinations.

Official guidance from Public Health England (PHE) says patients should remain in a room away from other patients and staff and be prevented from using communal toilets.